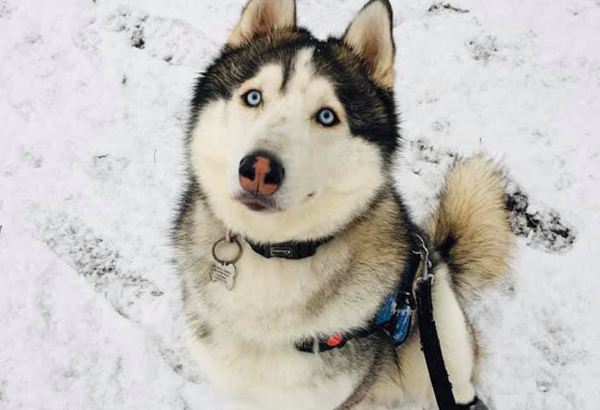 Mr. Blue was photographed roaming around the city of Tetovo bloodied and with a badly injured leg for TWO WEEKS. People just took photos of him in different locations and posted him on social media. Of course, we were tagged on those posts as we are in many weekly. We asked people that took photos of Blue to try and hold him until we get there. Tetovo is around 40km far from where we are and we couldn’t afford to run aimlessly around the city hoping we would spot him.
So, in every post we begged the people to try and hold him. Many didn’t care and thought it was our job to go look for him, others just said that they didn’t want to risk stopping an injured dog and then there was one odd fellow that sent us a private message. The message read that he was able to catch and hold Blue if we would promise him that we would come to pick Blue up. So we agreed.
The next day the person called and told us that he had Blue.
We arrived, Blue was very reluctant to come with us, for some reason he didn’t want to leave the guys side. We eventually found out that what happened was the previous owners didn’t walk him, Blue found ways to escape and go for a walk by himself, he was badly hit by a car which damaged one of his hind legs and destroyed the other. He then roamed around the city because his owners wouldn’t let him get back in the home. So, for two weeks he didn’t know what to do with himself, bloodied and in a lot of pain.
One of the legs was amputated while the vets suspected that the other leg’s two side nails are deformed and have gone into the meat on the paw. They could remove them however they couldn’t guarantee that he would walk pain free or walk more than he did until then.
His nails are deformed (based on the vet) because when he roamed the streets dragging his other broken leg, he stepped on the nails more than the actual paw of the healthy leg because that way he could move more easily by keeping the broken leg up. The two deformed nails were cut until the end. He had to be sedated because that was painful, we has to re-bandage that paw everyday and make sure it is always dry.
He is now happy with his family who take care of him very well. He is in minimal pain and his existing hind paw is as good as can be.