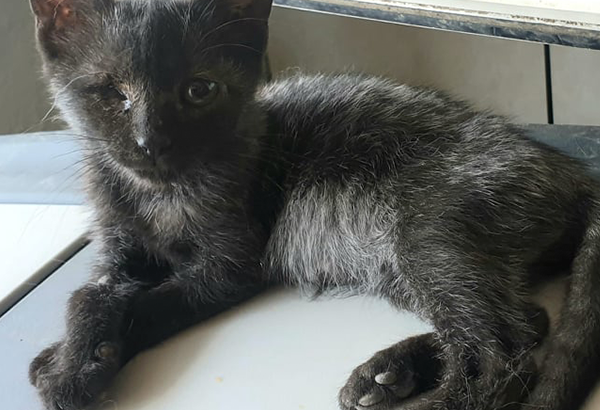 One day, one of our volunteers was driving towards the shelter and in the middle of a busy street noticed the kitten run towards the main road. The volunteer had to come to an abrupt stop to avoid running her over and trying to catch the little black kitty proved to be quite a challenge. She was a ball of energy and didn’t stop moving for one second! Not afraid of the cars or of anything, she was determined that she wanted to do what she wanted to do.

The volunteer caught her and took her in the car because the road was very busy so she was afraid that the cat, also by the fact that she had visible problems with her eyes, won’t be able to navigate correctly and perhaps run onto the road again.

The little girl was brought to the shelter, she was bursting with energy, and she jumped, purred, played, scratched, ate and did everything at the same time, not wasting time at all! We took her to the vet where it was determined that one of her eyes was damaged beyond repair and that was soon removed.

She is very energetic and obsessed with food! At one point we had to take her to the vet for an emergency check-up because we thought her stomach was abnormally bloated, turns out she doesn’t stop eating and the stomach was just as a result of her eating more than any normal cat her size however, that doesn’t stop her from climbing the highest cat scratching posts and playing with the other kitties. Thanks to Blind Dog Rescue UK she is now in a home.