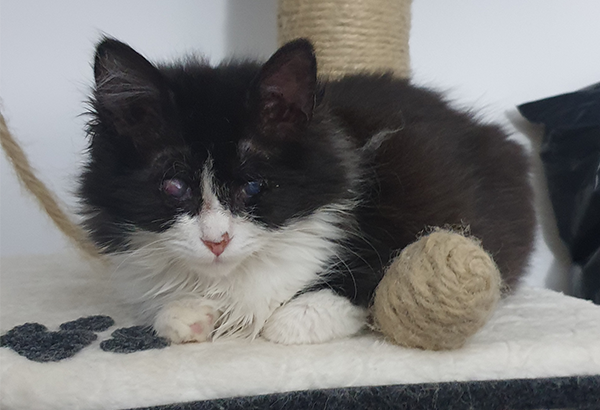 This little girl was scheduled for euthanasia by a woman that found her lost on the streets and looking for help. The woman took her to get put to sleep however, the vet upon touching her felt as if euthanizing her was unfair because she was so sweet and gentle and her purrs were extra loud.

We were called and asked if we had space for a tiny cuddly kitty that couldn’t see and we immediately accepted. She was given to us with eyes sewn shut however, later on that resulted in a lot of complications. Our vet had to open her up again and we had to treat the infection that was very active in her eyes. She never liked the medicine and always protested when the time came for her antibiotics. Now, her eyes are quite better but they are still not completely healed. Even though our vet are trying continuously to save at least 5 % of the sight in one of her eyes is is proving quite hard and even unlikely.

Until now, she has had two eye surgeries (not counting the one that was done before she came to us) where in both surgeries the vets opened her eyelids and corrected them as well as tried to remove the veil that had grown on the eyes itself so that we can try and salvage at least a small percentage of sight. Presently, she is completely blind and if there are any updates in the future we hope only for the better.