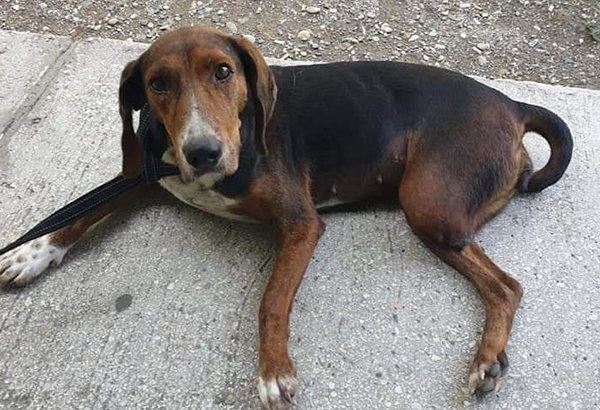 Loves to have never-ending cuddles and as much attention as you can give her. She is very gentle and very loving.

Molly is a hound and hounds are used quite a lot in N. Macedonia for hunting. However, when a hunting dog gets injured they are very often deemed as useless and abandoned in the mountains to fend for themselves. That is exactly what happened to dear Molly. She was found by a individual that was known in one of the rural villages for saving any animal in need.
Molly was found bloody and in very bad condition, she had the beginning of sepsis and was saved just in time. After being taken at the vet it was determined that her leg was irreversibly broken and needed to be amputated immediately. She was booked for emergency surgery and many weeks after the surgery received intensive care.

The person that took care of her had to find a place for her since he couldn’t continue to give her the attention she needed. We were contacted and she was one of ten dogs we accepted at the shelter from the same person. She was sadly bullied a lot by the other dogs at the shelter that is why we were extra careful that she received all that she needed.

She was one of the sweetest dogs we ever had a the shelter and even though she was a hound/hunting dog she loved all the cats and any other farm animals we had at the shelter. She wanted only cuddles and now in her home that is most definitely what she gets all the time.