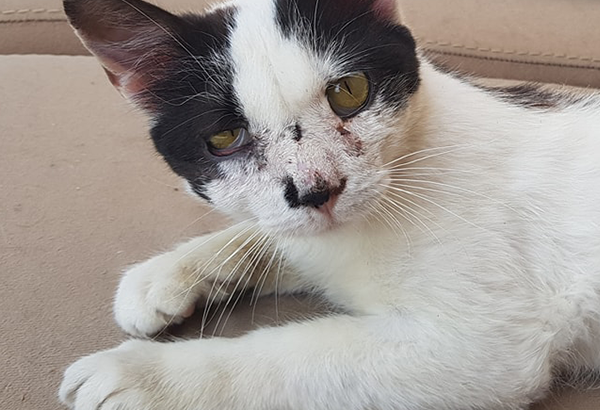 Bota was a very unusual sight and was spotted one day in front of a school patiently waiting for someone to help her. From all the people that passed by and ignored her profusely there was one woman that took the time to take her phone, take a photo of her and go on her way. That same woman posted the photo she took on social media and when we saw it we immediately went to search for her.

Lovely Bota was very smart, even though no one had shown the least amount of attention towards her for hours she was still at the same spot, waiting patiently, waiting for anybody that decided to help her. We arrived and took her with us, she was very grateful and rewarded us with many loud and continuous purrs.

The next day Bota was taken to the vet and unfortunately, we were informed that she had a big problem. The soft tissue around her face was abnormally tough and her eyes, even though healthy and intact, could not be used because the tissue was so inflamed that her eye sockets could not open. She was put on strong antibiotics that immediately helped the inflammation subside. For two months she showed very little progress but progress nonetheless. When the end of the second month approached we had to do extensive tests to find out what exactly was the problem since the tissue within the bones in her face was not recovering well.
For us, Bota was one of the most beautiful cats and we were happy as long as she ate and cuddled however, there was pain and swelling in her face and it was soon confirmed that she had cancer and there was nothing we could do to save her. She received regular therapy every day and we didfollow-up scans every 2 weeks to see if there is any improvement with the situation inside her face however, after 6 months in our care she sadly passed away.

Bota means world in the Albanian language and that’s exactly how we looked at her at the shelter, she was our world and we will always have her in our thoughts.