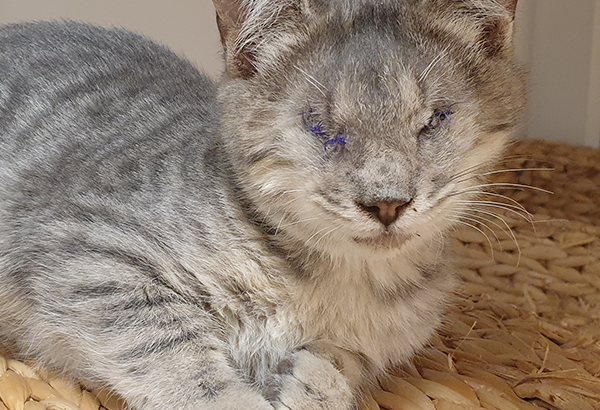 This is little Roxy, he was in the care of people that had found him with an eye infection. They tried to treat the infection by themselves which resulted in Roxy’s eyesight being permanently damaged. The people decided to then take him to the vet and once the vet told them he would be blind forever they left him there and went on their way.
Coincidentally, we were also there with some of our cats and saw the whole thing so we decided to take him with us. Before we took him the vet gave him a shot of antibiotics for his eye infection and we returned to the shelter. Little Roxy started having a seizure a short time after he got the shot. His seizure got so violent that we took him back to the vet. It turned out he was allergic to penicillin and was having a penicillin shock! The seizure lasted for close to 6 hours. The vets were skeptical and were sure his brain would not survive the ordeal if his body did. He was on IV fluids, he was sedated by the vet and we monitored his breathing throughout the night. Safe to say Roxy was and is an absolute fighter! He woke up the next morning, fresh, fast, and with a strong will to live.
Now, Roxy walks and runs but is a bit wobbly however, this is nothing that makes it difficult for him to have a normal life. He melts at the touch of any human and loves cuddling up to his mates and sleeping for hours until it’s time for some well-deserved food.