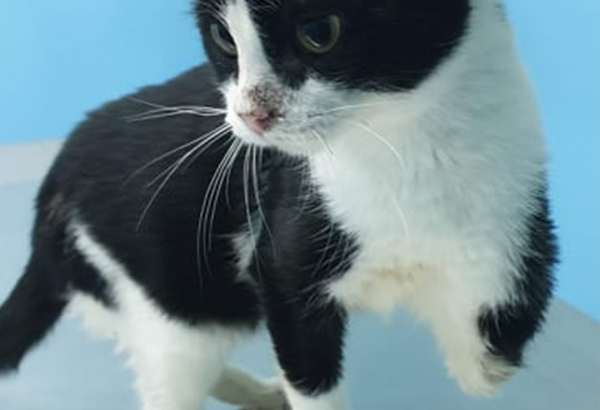 All skin and bones, covered with fleas and dirt, Tom was noticed all alone on the side of a busy street. Walking strangely on his three legs, not being able to stand on the forth one as it was damaged and painful.
He must have been an unusual (and very much unwanted) sight for passers-by so they avoided him as much as they could. Tom was noticed by a lady passing by who immediately called us.

When we took Tom in he was very scared and terrified, during the first couple of days when going to the vets, he stayed cowered in the corner of his kennel, scared, confused and extremely sad. However, after the leg surgery Tom turned into a very different cat, he became the total opposite of what we had seen prior to his surgery. He became unbelievably sweet, lovable and only wanted to be loved. He demanded to be cuddled, to be next to you, to follow you everywhere, to push his head close to your neck and to purr, long, determined, lovingly.

He deserved to have a person to call his own because at the shelter he had to fight for his share of affection. He deserved to have lots of love, hugs and a comfy and warm place to stay for the rest of his life. One day, thanks to the organization World Animal Friends in the UK, the person that was to become his mom read his story, saw his picture, and fell in love with him. She adopted him, took care of him, loved him so unconditionally until his last days where he passed away in his moms care, knowing what warmth, comfort, and true love/adoration really was.