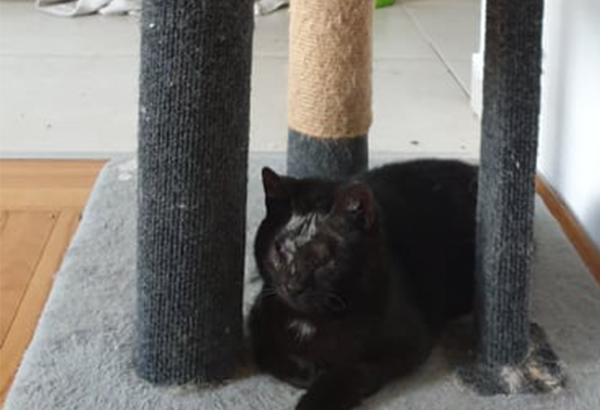 She was found in the city of Tetovo with one eye handing out of its socket and very damaged while the other eye had evaporated and was not visible in the eye socket. She was a sight that many ran away from even though she begged and begged for at least one touch for comfort. A lovely lady decided to help her and took her in but could not help her more than just shelter her that is why we were called for assistance and we immediately took her in.

Rumi was a sweetheart and one of the gentlest cats we have ever had, she was desperate for human comfort and cuddles and she expressed that the moment she felt a hand on her. Her meows are very characteristic and rather than actually meow she makes short chirping sounds that sound more like a little birdie than a cat. She melts with every stroke and even though she is blind she follows you everywhere by hearing your footsteps.

She had eye surgery where both her eyes sockets were cleaned and sewn shut and she recovered very well from the surgery. She doesn’t explore as much as our other blind kitties, she likes to be careful and even if she climbs somewhere she usually loudly demands for someone to grab her and put her on the ground rather than finding her own way down. She has a very gentle nature and does not like to bother other cats, if they initiate play then she will join otherwise, she will leave them alone. She was also not a big fan of toys in the beginning however, she has now found them very interesting and a very good motivator for her to jump around the room.